Romanians and migrants say together: SALUT – Home is where we live!

Since Romania could receive, in the following months, approximately 2,000 new migrants, relocated from other European states, improving migrant integration policies becomes a necessity. The 2015 migrant integration barometer shows that, in general, Romanians are welcoming foreigners, but have little information on their number, countries of origin, customs or culture. 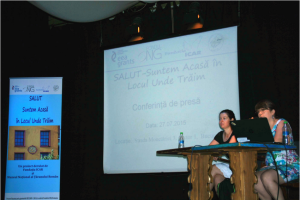 ICAR Foundation, an organisation with vast experience in working with migrants, and the Romanian Peasant Museum are launching today a project aiming at building information bridges between Romanians and migrants living in Romania.

The project named SALUT (which in Romanian means Hello) – We are home where we live attempts at breaking knowledge and prejudice barriers and at bringing together the two groups by common values such as tolerance and multicultural understanding, respect for human rights, equity and non-discrimination. Observing, getting to know and experiencing the traditions and cultural manifestations of other peoples, Romanians will be able to discover the values and beauty of their worlds, beyond stereotypes.

SALUT – We are home where we live is funded by EEA 2009-2014 grants, within the NGO Fund in Romania, and will last for eight months (1 July 2015 – 29 February 2016). The project aims, on the one hand, at raising public awareness on asylum and migration issues and, on the other hand, at promoting social inclusion of migrants and multicultural understanding between Romanians and migrants, by encouraging their active participation in multicultural activities.

The project features projections of artistic films and documentaries with and about migrants, a multicultural fair, three specific craft workshops organised by migrants and a press competition on topics related to migration, with prizes of Euro 2,200.

The project will last for eight months (1 July 2015 – 29 February 2016) and is funded through the EEA 2009 – 2014 grants, within NGO Fund in Romania. Welcome to the world of migrants in Romania! Resources: http://www.icarfoundation.ro http://www.muzeultaranuluiroman.ro. You can also find us on ICAR Foundation Facebook page, but also on the project Facebook page. For official information on EEA and Norwegian grants, please visit www.eeagrants.org.

For 20 years, ICAR Foundation has been providing free-of-charge medical, psychological, social services and legal assistance to victims of torture, ill-treatment and violation of fundamental human rights. The beneficiaries of the services are former political prisoners, refugees, asylum seekers, undocumented migrants and other migrants. By granting free-of-charge services for vulnerable groups, marginalised people, victims of flagrant violations of human rights, ICAR Foundation contributes to the strengthening of democracy.

Romanian Peasant Museum is part of the European family of Museums of Folk Arts and Traditions. It is a national museum under the authority of the Ministry of Culture. Holding vast collections of objects and being hosted in a historical monument building, with a Neo-Romanian style, the museum proposes a special type of museography, which allowed it to receive, in 1996, EMYA – European Museum of the Year Award. The original exhibition style is continued by the museum’s publications, by actions such as Missionary Museum, Village School or by events such as art exhibitions, concerts, conferences.

In Norway, migrant integration is taught in school
Our Team