This is who we are

ICAR Foundation has its roots in events taking place during the first hours of the 1989 Romanian Revolution, when its founder, Dr. Camelia Doru, then a doctor at the Ploiesti County Hospital, was present among the injured in the streets to provide medical assistance, not as a member of the hospital crew, but on her own. In those times of fragile and freshly gained freedom, being determined to pay attention and lend a helping hand to those who were considered outlaws by the new regime, Dr. Doru started a small organization. 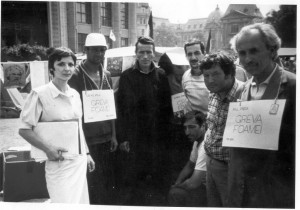 The activity of this foundation, which was led by Dr. Doru and a few philanthropists, was intended to heal as far as possible the physical and psychic wounds of those who had been oppressed by the former communist regime.  ICAR Foundation was able to spread its wings and take its mission a step forward due to the contributions of Corneliu Coposu, Constantin Ticu Dumitrescu and other personalities, as well as due to the internal and external fundraising, this making it possible for the foundation to stick to its mission.

The official registration of the ICAR Rehabilitation Center in Bucharest was made in 1992, ICAR Foundation being one of the first NGOs in Romania. By 1993 it was fully operational. Since then, its activity has been focused on offering free of charge medical, psychological, social and legal support to oppression victims of totalitarian regimes.

ICAR Foundation is the first and the only organization in Romania to design and implement a programme addressed to this type of target audience and needs. In its first years of activity, ICAR Foundation was determined to address the needs of Romanian former prisoners of state and their close families. As similar needs had been identified in other Romanian cities as well, new rehabilitation centres were established in Iasi, in 1995, and in Craiova, in 1998.

By using an internal network of specialists and by also maintaining a constant collaboration with external professionals, ICAR Foundation was able to provide medical, psychological and legal assistance to those who suffered from gross human rights violations: to people who were arrested and convicted on political, ethnic and religious grounds, to those who had to face deportation, exploitation, extermination policies in concentration camps, torture or inhuman treatment.

Starting with 2002, ICAR Foundation broadened its target group, as soon as it noticed that there was a new social group in Romania that could benefit from its rehabilitation services: migrants.  By adjusting itself to the changes that occurred in Romania, which was now becoming a country of destination or transit, not only a country of origin for its people, ICAR Foundation enriched its mission by including among the beneficiaries of its free services: the refugees, the asylum seekers, those people traveling without legal papers and the survivors of oppression in the country they came from. Romanian or foreigners, the basic needs were the same, namely to gain access: to medical services for their physical wounds, to psychological assistance for the psychic traumas and to legal assistance meant to provide a legal status for migrants in their new home country. In order to be able to accomplish all those goals, ICAR Foundation signed collaboration protocols with various international and national institutions and authorities, such as: United Nations High Commissioner for Refugees, General Inspectorate for Immigration (IGI) and others. Moreover, aiming at establishing a more efficient contact and a better communication with migrants, ICAR Foundation opened an additional office at the refugee camp in Bucharest.

Afterwards, in 2010, ICAR Foundation established branch offices in all General Inspectorate for Immigration (IGI) refugee camps throughout the country: in Galati, Radauti (Suceava county), Timisoara and Somcuta Mare (Maramures county), that action being possible due to a project financed by the European Fund for Refugees.